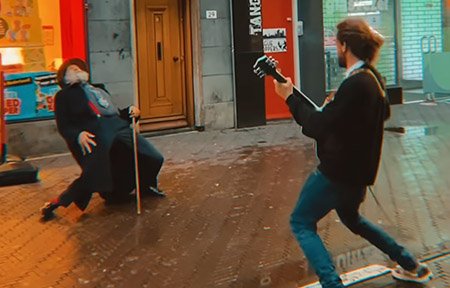 Borja Catanesi is a brilliantly talented electric guitarist who comes from Valencia, Spain. Borja entertains the streets with his melodic solos whilst spreading his happy personality.

Borja is well known in across Spain, and other countries, as a brilliant live street musician. He attracts large crowds in the streets where he performs, creating incredible moments, many of which have been caught on camera. In the underneath video, Borja is playing some improvised guitar solos on the streets of Valencia, when spontaneously he was joined by professional dancers, Rosa Carné, Adrià Martos, and Juline Carrel, creating an unforgettable moment!

He has traveled over 30 countries playing his music to passers-by. Using his guitar, a loop pedal, beatboxing and harmonising with himself, Borja produces a full sound that is 100% live. He loves crowd engagement, which is why he prefers to busk on the streets where his performances can be more intimate.

The close-up performances allow him to inspire his audiences to dance, sing, and play along with his music. In the video below, Borja can be seen busking again, this time in The Hague in the Netherlands.

Borja was the winner of “Feeling The Street”, an international music competition by car manufacturer Toyota. He also won “Universal Street Games” held in Minnesota, USA back in 2018. Borja opened his YouTube channel on the 19th of June 2018. Since then, he has had over 341,000 views across all of his incredible videos.

You will see in the clip below Borja is performing with his friend Toby Jacobs. Recorded in the streets of Atwerp, Belgium for ‘A Busking Road Story’.