The song “Too Much Heaven” was released by the Bee Gees on the 24th October 1978 in the UK, and slightly later in the USA and Canada (21 November 1978). The song was the band’s contribution to the “Music for UNICEF fund” which was a benefit concert of popular music held in the United Nations General Assembly in New York City on January 9, 1979.

The song hit number in Canada and the United States and became part of the bands thirteenth original album “Spirits Having Flown”. The song was very popular in the US, knocking the current number 1, “Le Freak” by CHIC off the top spot for just two weeks. “Le Freak” then returned to the number 1 position. Robin Gibb a Bee Gees band member, was reported to have said during an interview that “Too Much Heaven” was one of his favourite songs by the band.

The song was also very popular in the United Kingdom, hitting the top three. In America, the song became a record-breaker, becoming the fourth of six consecutive No. 1s from the band equalling the current record at the time held by Bing Crosby, The Beatles, and Elvis Presley for the most number 1’s from consecutive single releases. The 6 songs to hit the number 1 spot consecutively from the BeeGee’s were “How Deep Is Your Love”, “Stayin’ Alive”, “Night Fever”, “Too Much Heaven”, “Tragedy” and “Love You Inside Out”. 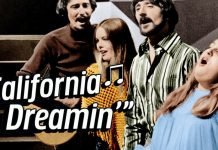 The Mamas & The Papas – California Dreamin’