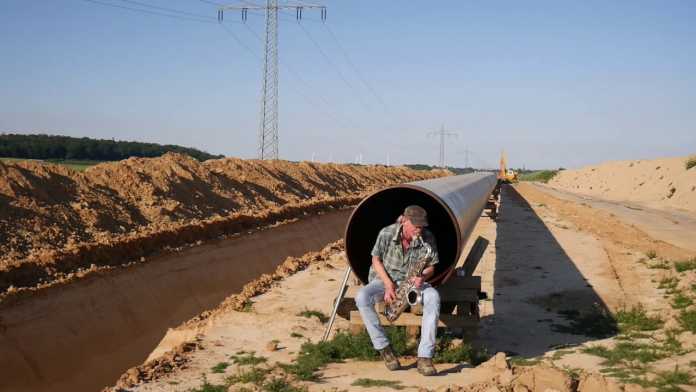 This man creating music using his saxophone and the natural echo from a gas pipe in Germany is called Armin Küpper. Not only does this naturally occurring delay effect sound awesome, but Armin can seriously play!

Armin explains, in German, what he loves so much about playing the saxophone, especially in this area. Roughly translated into English, “Hey, you’re not alone there! Sometimes I just can’t stop playing. The nice thing is, when it gets cool in the evening, I sit down in the tube heated up during the day and enjoy the sunset while playing the saxophone.”

Armin Küpper has been living in the small town of Liedberg near Korschenbroich for several years now. Korschenbroich is a city in North Rhine-Westphalia, Germany where we think the video below was filmed. Armin isn’t just a brilliant musician, he runs an art studio in Liedberg too and is well known for his great artworks.

He plays solo guitar, saxophone, and the didgeridoo and has received several awards for his art. These brilliant saxophone recordings next to a massive gas pipe have unsurprisingly been raking up views online recently. Creativity at it’s finest!

Armin also has made his own musical instruments. When talking about the Digeridoo he said,
“I heard a didgeridoo for the first time in 1990 from my friend Olli, who left it to me and went on a world tour again. It became one of my most important instruments. I have built some didgeridoos myself and play them solo or with a guitar. A frame enables both instruments to be played simultaneously, similar to Bob Dylan, who plays the harmonica with the guitar.

It is possible for me to dive into another world of fascinating sounds, to play and to take the listeners on an incredibly exciting journey.”

If you want to see more from this multi-talented artist check him out on YouTube & Subscribe to his channel for more awesome videos!