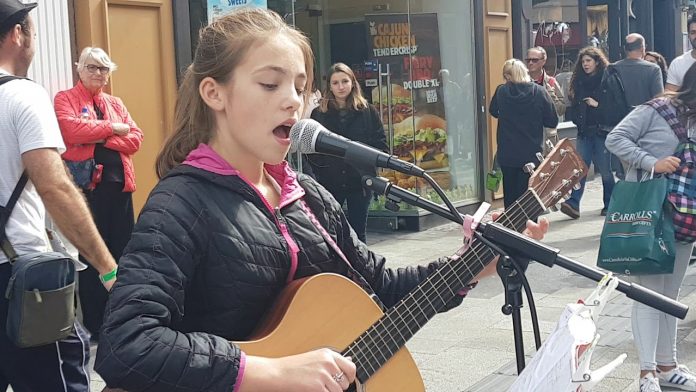 Allie Sherlock opened a YouTube channel in December 2014 to showcase her music. Her unique vocal tone and singing technique have been gaining attention from fans and people in the music industry.

Since opening her YouTube channel, the Irish singer has amassed over 290 Million views across all her videos. She began by uploading videos of herself busking on Dublin’s Grafton Street. She quickly attracted large audiences with her unique vocals and impressive musical ability at such a young age. She first started gaining attention after she uploaded a public performance of Ed Sheeran’s supermarket flowers in 2017.

The video went viral as Allie stunned people with her impressive vocals with upward inflections at the end of certain notes. This upward inflection is is a jump in Allie’s vocal cords, taking her up a whole octave. This is quite unique and adds another level of depth to Allie’s performances along with her powerful delivery.

Since her performance of “Supermarket Flowers”, Allie has had multiple other viral videos, growing her audience on a global scale. Her most viewed video on YouTube to date is this unique cover of “Shallow” from the 2018 hit movie “A Star Is Born”.

In 2018, Allie was invited to appear on The Ellen Show, a show hosted by Ellen DeGeneres in America. Allie was 12 years old at the time when she performed an acoustic version of Adele’s “Million Years Ago” to the live studio audience.

Working with Ryan Tedder, One Republic’s lead vocalist, Allie signed a five-year record contract with Patriot Records, which is owned by Ryan.

Originally from Douglas in Cork, Ireland, Allie left school in 2016 and is now homeschooled. Her father, Mark Sherlock, is the videographer behind her famous busking videos.