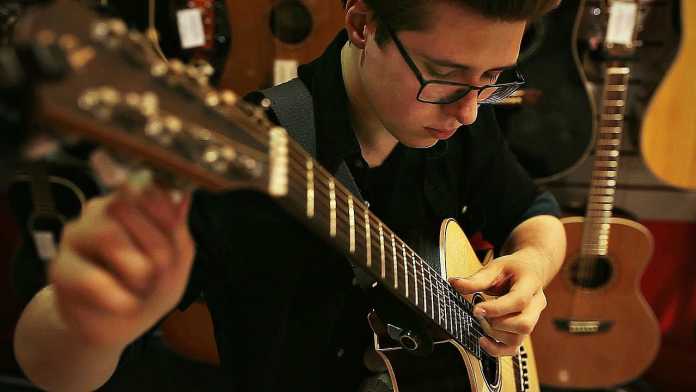 Alexandr Misko is an incredibly talented guitarist from Russia. His finger-style guitar playing technique is something to be admired and has been gaining attention from people around the world since 2012.

Alexandr started playing the guitar at age 12. Like most technically gifted guitarists, he started his musical journey learning classical style. As he mastered his craft, Alexandr discovered a style of guitar playing which would change the way he would play the guitar forever. In 2016 Alexandr uploaded a cover video of Micheal Jackson’s “Beat It” to YouTube, which went viral and has since received over 6 million views!

Talking about the fingerstyle guitar technique, Alexander said, “It leans more towards pop music much more than classical music, but at the same time it’s very interesting harmonically, it’s very rhythmic … so I was instantly hooked.”

The Russian guitarist opened his YouTube channel in 2012 and has since grown quite a significant following. With over 18 videos reaching more than a million views he has had some major hits on YouTube alone. His most viewed video to date (June 2020) is his awesome rendition of George Micheal’s “Careless Whisper” which involves some on the fly guitar tuning.

Alexandr plays a left-handed guitar with his second name “Misko” inscribed onto the 12 fret, which makes his guitar set very unique. He is very clear about his goals as a musician of which one is to remain authentic, which he believes is the only way to keep his music truly authentic.

When talking about how his playing evolved he explained, “I just took the things that I like the most from all of my biggest inspirations and I’m still trying to put it all together nicely.” In the video below Alexandr gets even more creative, playing the well-known theme song to “Pirates Of The Caribbean”, he almost changes his instrument into a violin.

Alexandr says on the about page of his YouTube channel, “Hi, my name is Alex and I’m a guitarist, composer and arranger from Russia.” The skill which goes into playing the guitar in the style Alexandr does is one thing, but he needs to arrange the song and essentially “plan” how he is going to express the music in his style. This isn’t an easy thing to do concidering some of the extremely complex rhythms and melodies he is recreating.

Alexandr won “Guitarist Of The Year” at the UK Guitar Show in 2018, an unsurprising award after watching any of his videos – extremely well deserved.