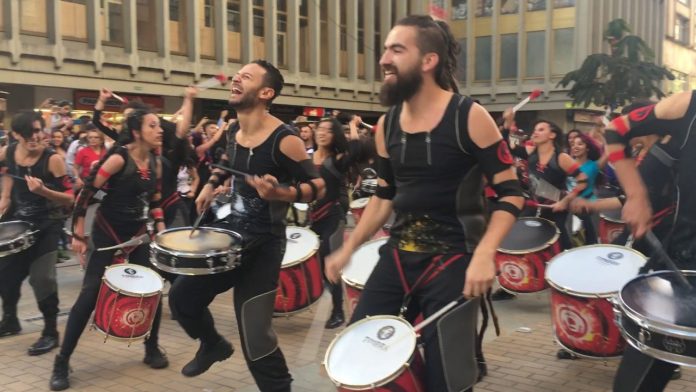 The people behind this mass gathering of drummers are the extraordinary percussion group called AAINJAA from Bogotá, Colombia. The band’s name roughly translates into English as “to do, to elaborate, to manufacture, and to build.” These brilliant young people bring talent, fun, and engagement to the streets that they play, gathering large crowds of people watching and listening to every beat!

The powerful drumming warriors are becoming a global sensation after multiple videos have gone viral on YouTube and Facebook. They start off with the repique, a two-handed Brazilian drum played with a samba rhythm with two thin sticks, then quickly joined by a group of snare drums, followed up with powerful bass drums called surdos. The combined sound of over 100 drums causes the residence to think a musical earthquake is hitting the city!

AAINJAA is a musical performance like no other, they have around 1,000 members between Bogota and Medellin available to play in their band/ensemble’s performances! Their performance is not limited to their instrument playing, they’re all taught to perform whilst athletically, dancing, and swaying with the beat. When over 100 drummers do this in perfect synchronization, you have a real visual effect on your hands!

Keeping rhythm whilst dancing around in such a large group of musicians is quite a feat, but these guys do it so well and with a smile on all their faces the whole way through. Let’s face it, everyone loves a street party and this brilliant band brings the party every time they perform.

No matter what our differences are, a festival atmosphere is a wonderful occasion. Their motto is to, “create spaces in which everyone is accepted, regardless of the differences that make us unique.”

They use a large range of different types of drums including tambourines and shakers creating thunderous bass beats all the way up to percussive rhythms.

One of their most popular videos on YouTube has received over 80 million views, as of August 2020, and still counting! They opened their YouTube channel back in 2013 and since then they have amassed over 103 million views across all their videos.