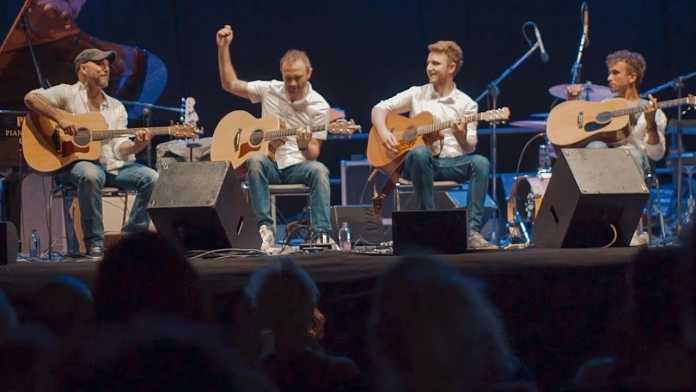 This is the multi-talented 40 Finger Guitar Quartet from Trieste in Italy. The band consists of Matteo Brenci, Emanuele Grafitti, Andrea Vittori, and Marco Steffè who all come from various musical backgrounds and have more than 15 years’ experience in the music industry.

This talented quartet has been creating beautiful covers of well-known musical pieces since 2017. Their eclectic musical style spreads across many musical genres, so you may find them performing the Astor Piazzolla ‘Libertango’ one day and Queens notorious ‘Bohemium Rhapsody’ the next. Watch the band naturally play the Spanish guitar together in the video below.

The band is also known for its unique and exciting approach to each performance, with an effortless technique. They have performed live in venues across Europe, although they are particularly popular in Eastern Europe and Italy where they tend to tour the most.

Below you will find a fabulous version of Vivaldi’s Estate / Storm filmed in the countryside which has received over 1 million views on YouTube alone.

Their videos are professionally shot in beautiful locations such as music halls, castles, and wine cellars which individually complement the tone of each song.

The band has also been known to attempt well-known theme tunes such as that of ‘Game of Thrones’ and a wonderful Disney Medley which has seen over 3 million views on YouTube. If you are a Disney fan, you won’t be disappointed by this next video. Here you will find their version of The Little Mermaid, Beauty and the Beast, Tarzan, and Aladdin, to name but a few, and the transitions between each song are faultless.

If you hadn’t guessed the inspiration behind the band’s name yet, it’s very simple. 4 members with 10 fingers each, I’ll let you do the math.

Their rendition of the popular Star Wars theme tune has also received several accolades. Every time we watch this video, we are reminded of the band’s sheer enthusiasm, joy and passion for making music.

They have released an album, along with several singles, which are all available on Spotify. If you’d like to see more from this brilliant band of guitarists subscribe to their YouTube channel or follow their Facebook page to keep up with their latest videos!